By now, you may have seen a clip going around the internet of Stephen Colbert dancing to Get Lucky by Daft Punk after the duo “cancelled” for his yearly music festival.

Initially, reaction to the clip was positive, with lots of tweets and shares on major news outlets. But then,people had doubts. First of all, there was evidence that both the Get Lucky montage and ensuing performance of Blurred Lines by Robin Thicke were taped at least a week in advance. In addition to this, it was noted that Comedy Central and MTV are both owned by Viacom, and that this could be an elaborate marketing plot for the Video Music Award’s. (The reason for the supposed cancellation involved an exclusive commitment with the VMA’s.) Even if the plot was not this complex, the New York Times reports that Daft Punk had never planned to be interviewed or perform, which runs directly contrary to the initial promises by the show. From any of these accounts, it can be inferred that The Colbert Report made a conscious decision at some point to deceive customers, and then reaped the benefits in the form of a widely shared video and lots of social media chatter. 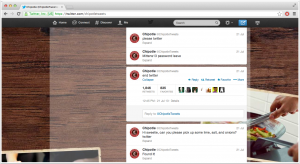 This was relatively short-lived, and Chipotle was quickly discovered as intentionally mis-tweeting; eventually they were forced to state “It was definitely thought out: We didn’t want it to be harmful or hateful or controversial.”

These two recent instances beg the question: for a team of marketers trying to get ahead, how much is too much? Is it crossing the line to intentionally mislead customers?

In my opinion, while these stunts by major brands tend to appear desperate, similar marketing tactics can work well for startups. Large brands don’t need the thousands of shares these campaigns can generate, and have more of a reputation to tarnish. Startups are small and unknown in many circumstances; there’s little reason NOT to take a risk in marketing plays. This doesn’t mean that I would recommend a little known site to make an uncomfortable dance video like Colbert or tweet out nonsensical phrases like Chipotle, but I would encourage them to think outside the box. Any online startup news source or blog, for example, could have carried out The Sun’s royal baby prank, which garnered immediate national attention and cost little to nothing. Or, a founder could take a page out of content-aggregation service Reddit’s book. While trying to create a following, Reddit’s founders enabled an administrative function that allowed them to post tons of content under different user names. Although fake, it filled up the site with quality content and made users believe the site was alive and active.

Should you employ any of these tactics? If you don’t have much to lose, maybe. Should Chipotle or Colbert? Absolutely not.

What do you think? Is it acceptable for brands (big or small) to purposely mislead their customers in order to get ahead?

Gmail, Promotions, and the death of Email Marketing

You’re not the next Warby Parker

There is no better way to get potential customers on your site or ...

You have probably heard about the term “growth hacking” but you are probably ...

SEO Trends for the Next Decade

The next decade will bring us new ways to promote websites, products, and ...