Think back to those Saturday morning cartoons we all enjoyed so well – remember the intrepid adventures of Wile E Coyote and his pursuit of acquiring a delicious meal courtesy of Roadrunner?  Each week we would see time and time again Coyote fail (albeit creatively) in his attempt to trap the Roadrunner and get his well-deserved glory.   But it wasn’t just the number of times he attempted and failed (though that figure is mightily impressive) – it was the inventive myriad of ways the Coyote was set to fail:

Strapped to a rocket – check 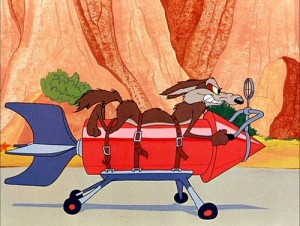 Used self in bow & arrow – yeppers 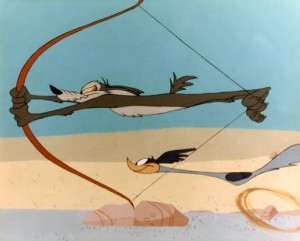 Yes that is right – hundreds and hundreds of attempts to capture that shifty Roadrunner left the Coyote with nothing more than an empty stomach (and usually a body cast of some sort.) – but the law of averages says that the Coyote had to get it right sometimes, right?  After so many attempts and practically exhausting the ACME catalog, wouldn’t the Roadrunner have finally met his match even a few times?  Well, that was never the case, and one reason we see the Coyote failing so often may reside in the fact that he never really repeats the same method of attempting to capture the Coyote more than once.  ACME rockets, ACME slingshots, dynamite lining the road, even painting roads on the side of mountains – all of these potentially viable solutions, all of them tried once and then abandoned for the next initiative.  But, what if the Coyote had tried that slingshot two times in a row?  What if, instead of employing the rocket and rollerblades plan and then moving straight to painting the side of the mountain, he recalibrated his projections and launched with that same original idea in mind?

Now look at the world of tech startups.  Agile – lean – pivoting – iteration – re-launch – re-tool – disrupt – hack: so many words circling around entrepreneurs, all driving at one constant concept: absolutely embracing rapid technical change at all times.  That’s right, entrepreneurs being the sort they are, have taken to the concept of embracing changes in their product like a nine year would a blankey. Much like our furry friend Wile, they look at individual opportunities to achieve their product goal, versus measuring a singular effort over the aggregate.  In the realm of technical startups, nowhere is this “Wile E Coyote Effect” more prevalent than in product development.

“We launched our site yesterday and users aren’t registering at a high enough rate – we must redesign it NOW!”

“Instagram is popular, so it is mission-critical that we integrate a photo-sharing feature into out mobile app too.”

“One of our competitors has an animated video explaining how to use their app, so let’s get our designers make one for us ASAP.”

The philosophy of change and product evolution has brought about one of the greatest digital and technical startup bonanzas in recent memory.  These concepts have taken obscure dorm room dorkies and made them into millionaires – these concepts have helped generate billions in new wealth on the open market – and these concepts have produced some of the coolest and most advanced applications over the entire history of software development.  But for every success story posted on your favorite site, or interview conducted in this or that magazine, I would argue there are a larger number of startups that have stunted their potential growth just by blindly chasing rapid and rampant changes in their business, products or approach.   The bottom-line is that making changes requires resources like time, money and manpower (all of which are in short supply for most new ventures.)  And even in situations where an eventual change is called for, making changes in your product too quickly may cause you miss out on identifying what exactly that change should be.

This startup ecosystem we are currently in is nothing if not shifty and ever-evolving.  The truth is that technology, consumer expectations and competitor strategies are changing daily; and while I would never advocate wholesale abandonment the principles which have helped countless companies succeed and grow, I do want to caution entrepreneurs to avoid employing new tactics so quickly as to see them not run their proper course of testing and vetting.  So rather than immediately looking to pivot or change course next time you are met with a challenge, instead maybe employ a little tactical stubbornness by sticking to your original product idea for a bit longer and perhaps you too can one day dine on the delicious meal known as roadrunner stew. 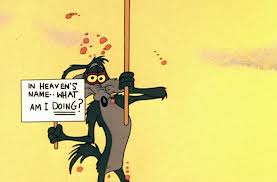 You’re not the next Warby Parker

Three Ideas to Increase E-Commerce Conversion in an Hour

The humble hamburger is a staple dish in the western world. It’s so ...